Greetings Humans of Landlord Broadband,
Thank-you for subscribing to our quarterly newsletter that keeps you updated on what we have been getting up to, and what has been moving and shaking in our industry. We hope you find it informative and a useful check-in.  We look forward to hearing from you in the future. Get stuck in to everything from PropTech to IoT and Brexit!

Whats going on in our Industry?

During the last quarter we have seen several significant changes in property technology (Proptech), housing association funding and the economy.

Housing associations have welcomed Theresa May’s announcement of an extra £2bn in longer-term funding for new developments. This is as homelessness charities said the measure should be the start of a wider shift in government towards seeing the benefits of social housing. The prime minister told the National Housing Federation (NHF) conference in London that the money would fund schemes over the next decade.

Proptech is the future for landlords,  we are currently seeing an emergence of new systems all designed to give the landlord more real time control of their portfolio (IoT).  In the wider PropTech market, cryptocurrency has recently been adopted amid stability fears to purchase real estate, and pay deposits and rent in the rental sector – the first time the virtual currency has been used in the UK residential homes market.

Interest rates have risen by a quarter of a percentage point from 0.5% to 0.75%. This is the highest level since March 2009. In addition there have been calls from RBS boss Ross McEwan stating that  a “bad Brexit” could result in “zero or negative” economic growth which would hit RBS’s share price. He also said the bank was becoming careful about lending to certain sectors of the economy – particularly retail and construction.
After eight years of cuts which has seen £45bn (or 10% in some years) stripped from central government spending, Theresa May has said that “austerity is over”. This raises the stakes for the Chancellor ahead of the Budget  in two weeks time. Philip Hammond is always wary of announcing the “end of austerity”, given the fragility of economic growth and the fact that many cuts, such as to benefits, have yet to work through the system.

What are we working on?

The movement of the buy-to-let market has been turbulent over the last quarter. With the ban of tenant fees hitting letting agents in 2019, much speculation has arisen over the future of high street agencies. Many news stories focus on the notion of independent letting agencies being forced under due to their tight margins now being stretched too far. Despite this there has been a rapid increase of construction within the buy-to-let market. These two seemingly contradictory statements show how difficult the future of letting agencies is to predict. There is no doubt the tenant fee ban will  stretch many buy-to-let agencies. As we have already seen, an increased number of buy-to-let agencies will also appear online. This is due to it being more cost effective. However, this will certainly not mean the end of all high street letting agents.

We are seeing a large expansion of the serviced accommodation sector. We have seen numerous developments open over the course of this year. The supply of serviced accommodation within the UK is expected to rise by approximately 17% by 2020. ASAP’s (Association of Serviced Apartment Providers) recent survey showed some operators seeing bookings surging by 5-50% percent during the last year. ASAP Business Partner STR Global figures show that among the UK’s 22,821 serviced apartments, occupancy averaged 81.7% in 2017, outperforming hotel rooms. The UK alone has a reported turnover of £1bn. With the sector being pressured by new laws instated due to Brexit means it will be able to survive the changes, and any challenges will not have a major impact on the industry.

Meet Business Development Manager Ala, our Broadband and Wi-Fi sales aficionado. Here’s what he get’s up to when he’s not bringing in the business . “I am a father of 2 lovely boys, 17 and 14 years old. Spending time with my wife and kids when not at work and enjoying great family lifestyle if my favourite activity. I like football and going to the gym on Saturdays and Sundays. I  find it exciting to help our clients to implement our wireless and property technology (IoT) solutions within their portfolio. In addition I enjoy increasing the efficiency of their investment . Prior to joining Landlord Broadband, I worked for several Telecommunication manufacturers and solution providers, I read books and enjoy having a drink with friend and sharing a laugh.” 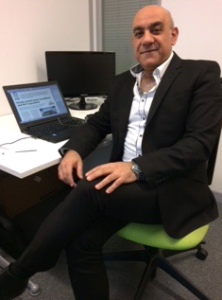 That’s it from us, we hope you enjoyed our newsletter,

(The champions of Wi-Fi friendly accommodation)

Still want more?  Click the links below to find us on our website and on social media!

Fun Fact:  The term Internet of Things (IoT) has been around for almost 20 years! It was first coined in 1999 by Kevin Ashton, a British visionary and engineer.